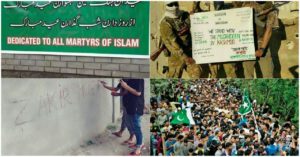 Reading about the terrorist attack on Amarnath pilgrims, I came across a write-up in The Indian Express with the headline ‘The attack that restored Kashmiriyat’. A day ago India’s Home Minister had also expressed the same feeling when he said, “Kashmiriyat still alive, I salute it”. What is Kashmiriyat? Where does it live? What type of spirit gets restored by a terrorist attack which took seven lives and injured 19 more? Something was missing.

As per Neelmata Purana, Kashmir takes its name from Sage Kashyap who chiseled the mountains in shape and made the place habitable. Lord Shiva used his Trishul to make the first dig and thus started the work of excavation. Soon the land was leveled and the banks of river Vitasta took shape infusing life into the area and providing water for agriculture. When the land was ready, sage Kashyap invited people from other parts of the country to settle down there. Accepting this invitation, people from different castes, sects, and occupations settled in Kashmir. Neel, the son of Kashyap, became the first king of Kashmir and he welcomed everyone with open arms, providing equal opportunities to all. In Kashmir valley, various Panthas and sects lived in perfect harmony. The essence and core of Indian ethos are ‘Reverence for all beliefs’ and the same ethos was followed in Kashmir. That was Kashmiriyat.

Since ancient times, Kashi and Kashmir were renowned for their educational system. But with Kashmir surpassing Kashi, the scholars used to come to Kashmir to complete their education. Even today the people of Kashi send their children to Kashmir on the occasion of Akshar Gyan and those who cannot go are asked to take seven steps in the direction of Kashmir wearing Janeyu, the sacred thread of Hindus. Since, the earliest times, Kashmir was known as the land of sages, Rishis, Muths, temples, and universities. Anyone who possessed the knowledge and disseminated it to the society was called a Pandit and thus Kashmir became the land of Pandits. Kashmir awarded the title of ‘Pandit’ to all its people, irrespective of their caste, creed or social hierarchy. That was Kashmiriyat.

In January 1990, a local newspaper published a press release issued by Hizb-ul-Mujahideen which urged the young people to wage Jihad for secession from India and accession to Pakistan. The release also ordered Hindus to leave the valley. The night of 19th January 1990, was too long. Many Kashmiri Pandits still shiver at the mere thought of that night. As the night fell, highly provocative, communal and threatening slogans and martial songs started blazing from loudspeakers of the mosques. Islamists urged the faithful to give a final push to the ‘Kafirs’. Pandits were presented with three choices – convert to Islam, leave the place or perish. Thousands of Kashmiri Muslims poured into the streets of the Valley, shouting the death of India and death to Kafirs. The Exodus of Pandits began. Hundreds of Pandits were tortured, killed and raped. Around 3,50,000 Kashmiri Pandits left the valley to save their lives. The slogan “Kashmir mein agar rehna hai, Allah-O-Akbar kehna hai” was relayed continuously. Kashmiri Pandits were ethnically cleansed out of their own land. With them, Kashmiriyat also left Kashmir.

In last two decades, of the 438 temples in the valley, 208 have been destroyed and the land of the temples encroached upon. Remaining temples are also under constant threat from Islamist militants. Still, Kashmir continues to be the sacred land for Hindus as one of the most important pilgrimages of Hindus, Amarnath, is in Kashmir. For many years, Pakistan funded terrorist outfits have threatened to disrupt and attack the annual Amarnath Yatra. Every year, it is done under the watchful eyes of security forces. On my visit to the valley a few years back, I was shocked to see every remaining temple in the valley with heavy armed forces deployment. How shameful that in their own land Hindus are struggling to even visit their holy places!

Amarnath Yatra and tourism are the backbone of the otherwise fragile J&K economy. In 2013, the number of people who visited Amarnath was 3.53 Lakhs which reduced to 2.2 Lakhs in 2016. If the trend continues, it will stop forever. The weak condemnation of the recent attack by local leaders in the name of Kashmiriyat, is more for the loss of revenue than for the pilgrims’ lives.

Today when Kashmiriyat is mentioned, I try to visualize the beautiful, picturesque, tranquil land of Pandits known for its beauty, temples, gardens, craftsmanship, the calm waters of Dal Lake and the snow covered mountains. But unfortunately, I can only think of a terrorist hub where our soldiers lose their lives daily. Where the people, for whom the soldiers risk their lives during natural calamities, attack them with stones. Where a policeman, Ayyub Pandit is lynched by a violent mob for having ‘Pandit’ in his name. Where Hurriyat leaders enjoy the facilities given by Indian government but instigate people to wage a war against the same. Where the killed terrorists are wrapped in ISIS flags as a reward for their loyalty to their masters on the other side of the border.

Search for Kashmiriyat will end the day Kashmiri Pandits return home to their land and reclaim what is rightfully theirs. True Kashmiriyat would be when Kashmiri youth will eulogize Kashmiris like Bana Bhat and not Sabzar Bhat. When Lieutenant Umer Fayaz would be the poster boy of Kashmiri youth in place of Burhan Wani. When the land of saffron gets back to its roots in saffron.