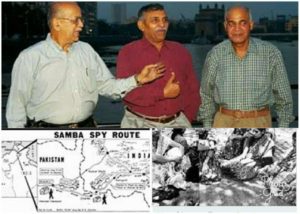 A few days back when International Court of Justice stayed the death penalty given to Kulbhushan Jadhav by a military court in Pakistan on the charges of spying for India, the whole country celebrated this victory. Though it wouldn’t mean much till the time Kulbhushan Jadhav is safe home. The similar case of Sarbjeet Singh, an innocent civilian who crossed Pakistan border accidentally had seen the worst outcome. The whole country mourned his death in Pakistan custody. Our country is always high on emotion when it comes to our soldiers or civilians suffering at the hands of the enemy. Then why for last 4 decades, we have overlooked the suffering and torture of our more than 60 army men. What made their own colleagues to give third-degree torture to them? Army as an organization always looks after the welfare of the families. What made it shut its doors for the families of Samba Spy Case victims?

The Samba Spy Case is the darkest chapter in the glorious history of the great Indian Army. Darkest and unparalleled! Nowhere in the world did it ever happen that so many army officers of one particular formation were implicated in a spy case. What started as an individual incident of spying took an ugly turn when many officers of the entire Samba region were named in it. The mystery remains as why was no officer above the rank of Major named in the case.

Sarwan Dass, a gunner in Indian Army, started crossing Pakistan border in Samba sector to make quick money. Soon he came in contact with Major Akbar Khan of Pakistan Army and became a spy. After some time he involved Aya Singh, another soldier too. Both crossed the border many times with crucial information about the locations, formations, men, and equipment. He stole Army’s Battle of Order too. In 1975, IB caught Sarwan Singh and the interrogation revealed nothing much. The case was then handed over to Military Intelligence and he remained there from July 1975 to August 1978. Meanwhile, Aya Singh was also arrested.

The MI allegedly tortured Sarwan to get the names of others involved in espionage. Sarwan was made to narrate the meetings that had never taken place and the people he had never met. Broken by torture, he gave away whatever names came to his mind. Then those named by Sarwan were tortured one by one. They, too, gave random names. All those arrested were tortured and made to testify against each other. Some were named to settle a personal score. Captain R G Ghalawat, Sarwan’s battery commander, was named because he once scolded him. He was given 14 years of rigorous punishment. Humiliated at being labeled a spy, he died of a heart attack later on.

In 1978, Aya Singh, named Capt RS Rathaur, one among the brightest Indian Intelligence officers, who won appreciation for his exceptional service. Sarwan told interrogators that he had collected classified files from Capt Rathaur and took him to meet Major Akbar Khan in the ‘Kandral post in Pakistan’. A blatant lie! Kandral post is in India and the dates given by him proved false as Capt Rathaur was attending his official Dining out in the Officer’s Mess. Other dates did not match too. As on those dates, he was spending his leave in his native village and many villagers have testified of his presence in the village. After resisting for days, the pain of torture finally broke Capt Rathaur too and he was left with no other option but to randomly name others including Captain A K Rana just to make the interrogators stop the barbarity. Thus started a vicious circle of lies, fabrication, and torture. Why did Army fail to make public the documents that were allegedly passed on to Pakistan? If an enemy already has those papers, what harm would it have caused if the court also knew about them?

In 1978, Havaldar Ram Swaroop was also named and arrested. His only fault was that he was an old acquaintance of Capt Rathaur and met him when he was on official duty in Delhi. Only one month after his arrest he was found dead in Delhi Cantonment area. Though 3 post mortems were performed on his body, the findings were never made public. In Army documents, the cause of his death is elaborated as ‘found dead because of a drug overdose’. In 2011, his post-mortem report has been traced to a Delhi hospital which states that he died of coma and severe pain resulting from multiple injuries (around 40) and burns. He was tortured brutally.  Major R K Midha, Swaroop’s Commanding Officer, was forced by the powers that be, to declare Ram Swaroop a drug addict but Major Midha refused. Then – no points for guessing – Major Midha was also implicated and given seven years rigorous imprisonment.

Surprisingly, whosoever raised a doubt, tried to reach to the truth or refused to succumb to pressure, was also named, arrested, implicated, and tortured. Maj Ajwani, who was deputy advocate-general in the Northern Command was implicated after he refused to accept some forced testimonies. He was the first judge to comment adversely on the testimony of two Military Intelligence officers. Luckily Major Ajwani escaped as witnesses refused to give false evidence. In all, around 50 officials lost their ranks, were court marshaled and arrested. The angle of Pakistan’s involvement in the false case was never probed. Khalistan movement started immediately after this case. Were there any Khalistan sympathizer moles in the Indian Army who wanted to demolish the whole intelligence network in a crucial border area like Samba?

The inhuman torture inflicted by MI officers to their own colleagues was unimaginable. According to Capt Rathaur-

They boasted of 36 methods of torture. My body was lacerated all over. My ears were disfigured. My left hand was paralyzed following the insertion of needles under my fingernails; they tore my whiskers, hair by hair….They would tie weights to my testicles and drag me on the floor by one leg, with one man sitting astride my back. Similar treatment was given to other accused.

On December 2000 Honorable Delhi High Court called “the gross miscarriage of justice” done by the army to its officers in the Samba spy scandal which rocked the country. But later on, SC quashed the HC order. The justice was denied to the victims once again.

Sarwan Dass met me recently in Delhi at the launch of Major N Ajwani’s book ‘The False Spy’. At the press conference, he confessed in front of the media that he had named innocent people because he was forced to do so. He accused four MI officers – Brigadier T S Grewal, who was then MI deputy director, Brigadier S C Jolly, Captain Sudhir Talwar and Colonel V P Gupta. His interview reveals all. Many victims of the case were present on the occasion. Their drooping bodies and wrinkled faces tell the sad story of their torturers. Their bodies are frail but still, a faint glimmer of hope can be seen in their eyes. How unfortunate that the soldiers who were trained to fight the enemy, have to fight their own system for justice. Are they fighting for money, position or compensation? NO! They want only their honour back. Will they get?