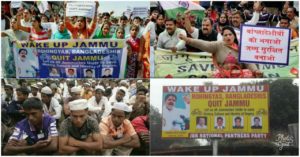 Recently a housing society in Noida witnessed an unprecedented incident when a group of illegal Bangladeshi migrants attacked residents, vandalized property and created a ruckus in the area. This maybe a bizarre incident but the menace of illegal migrants is affecting the country in more ways than one. For decades, India has been hosting a large number of refugees from other countries. India is not a signatory to the refugee convention and has no law on illegal migrants. The border areas of India are facing the problem of illegal migrants for many decades but in recent years they have started spreading to the rest of India also like an epidemic. Besides Bangladeshis, Rohingya Muslims from Myanmar are also reaching India in large numbers.

The Rohingyas are one of Myanmar’s many ethnic minorities and are descendants of Arab traders. Myanmar’s government denies them citizenship and sees them as illegal immigrants from Bangladesh. About one million Muslim Rohingya are estimated to be living in the western Rakhine state of Myanmar, where they are a sizeable minority. They live alongside the mostly Buddhist Rakhine people, who are state’s dominant ethnic group. In 2012, the outbreak of communal violence forced the Rohingya to leave the country. Hundreds of thousands of undocumented Rohingya are already living in Bangladesh. Now along with illegal Bangladeshis, Rohingya are also crossing Indian borders. Earlier mostly migrants settled down in Metropolitan or industrial cities. Now the migrant settlements are mushrooming even in small cities. As the influx of migrants is from the east of the country why would Rohingya Muslims cross the whole breadth of the country and settle in Jammu of all the places, is beyond comprehension?

According to an estimate 40000 Rohingya are living in India and out of these 10000 are living in J&K alone. Another estimate is that 20000 Rohingyas and 50000 Bangladeshis are living illegally in Jammu. Home Ministry gives the number of 5700 but it can be much higher as there is no way to know. Even security officials are baffled at the large number of Rohingya present in Jammu and Samba. They wonder how they traveled across India, passing through so many states and reached Jammu. An attempt by some forces with vested interests, to change the Hindu majority Jammu region, is also not ruled out. The worst fear of the security forces came true when fake state-subject certificates, voter ID cards, Aadhar cards and ration cards were recovered from the temporary shelters of Rohingya Muslims during surprise raids. The fact that these immigrants have penetrated the state machinery, is shocking. How did the State Government Departments fail to detect the fake documents and verify the details provided? Who are the political sympathizers of Rohingyas, who want to settle them with the sole purpose of changing the demography of Jammu region?

There are some NGOs who are funding the stay of Rohingyas in Jammu and Samba districts. ‘Sakhawat’ and SR Institute of Development, both Srinagar based NGOs, ‘DAJI’ a Delhi based NGO and ‘Save the Children’ are some of them. At least three Madrassas are also associated with Rohingyas. A quick check on some of these NGOs revealed their nefarious designs. Save the Children is a controversial international NGO and many irregularities have been found in many countries in its functioning. Pakistan ordered this NGO to leave the country in 2015 when it was found that it was working against the government. DAJI is run by Ravi Hemadri who is an activist. He has worked with tribals and refugees. He along with human rights activist Vrinda Grover, Maoist sympathizer Bela Bhatia formed a fact finding committee on Kashmir. This is what he found –

The stifling of rightful dissent is among the major factors for violence and unrest. Violent public protests involving stone pelting usually occurred as consequence to the denial of people’s peaceful expression of dissent.

Where does his sympathy lie, is not hard to guess.

The situation in Jammu is a threat to the national security. Some of the Rohingya settlements are in strategic forest areas near river Tawi. In November 2015, security forces killed two militants in Kashmir’s Tral town. Their names were Abdur Rehman al Arkani aka Chota Burmi, a native of Myanmar and his associate Adeel Pathan. If this incident does not open the eyes of the government, what would? Poverty, the influence of dubious NGOs, the involvement of Madrassas can easily radicalize these migrants. Better that the government wakes up now rather than regret later on.