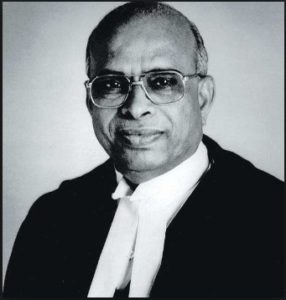 In January 2018, when four top-level judges of Supreme Court made some complaints against the Chief Justice Dipak Mishra in a press conference, the country was shocked. For most of the present generation, it was new and unheard of. The press conference was just the beginning of a big game played by Congress to remove Justice Misra probably because he heads the bench for the Ram Janam Bhoomi Case. Fearing for the Hindus to win the case, Congress is trying to stall it in every possible way. It knows that a decision in favor of Ram Temple would mean a landslide victory of PM Modi. Today Congress is trying to gather the support of opposition parties to impeach Justice Deepak Mishra. The story of impeachment of judges started in India 25 years ago. All the characters involved in the impeachment of Justice Mishra were present then too. Only the roles were reversed.

Justice V Ramaswami was the first judge in independent India on whom impeachment motion was brought. Justice V Ramaswami’s legal career was full of controversies. Right from the beginning of his legal career, his appointment as judge of Punjab and Haryana High court to the way his legal career ended, everything was laced with controversy. Till date, he is the only judge to have been appointed on the recommendation of a chief justice who was his father-in-law. Interestingly his father-in-law Justice Veeraswamy resigned during the Emergency after CBI raided his house to recover unaccounted money from his house.

His appointment in the Madras High Court in an irregular manner raised many eyebrows. Ramaswamy never had an outstanding legal career. He began as an apprentice under Veeraswamy who was a government pleader then and later on became a judge. Ramaswamy married his daughter and was elevated to be a judge by Veeraswamy in 1971. Ramaswamy never had a good private practice. His tenure as a judge in Madras High Court was also quite eventful and controversial. He ran a dairy with 10 buffaloes in his backyard. Another unusual incident was that he chose to decide a case in which his wife was a party. Heading a division bench, Ramaswamy deleted his wife’s petition from the list and next day when the case came up before a single judge, he was bound by the decision taken by the division bench. Another controversial judgment he gave was against the workers of a company. Incidentally, the company belonged to the family of Congress MP R Prabhu who later on played an important role during his impeachment. As his relationship with Congress strengthened further, his son Sanjay Ramaswamy went on to become a Congress MLA.

Despite the lack of an outstanding legal career, controversies, and irregularities, in a shocking decision Rajiv Gandhi handpicked and sent him to the Punjab and Haryana High Court to tackle terrorist cases. That during his 2-year tenure in Chandigarh, TADA accused continued to go on bail and there was not a single conviction, is another matter altogether. Controversies continued to stick to him in Chandigarh too. Between 1987 and 1989 Ramaswamy bought furniture and carpets worth Rs 50 Lakhs for his official residence and office from government funds. The work was done without any tendering and on the basis of bogus quotations. In fact, nothing was ever bought and the funds were squandered. In his tenure of 22 months, he made the court pay the telephone bill of his official residence of more than Rs. 9 Lakh. Moreover, the telephone bill of whopping 76 thousand of his personal residence in Chennai was paid from court funds. It was really shameful that a judge who was handpicked by the PM himself was indulging in the serious misuse of official powers.

In 1991, the entire opposition of 108 MPs headed by Madhu Dandwate gave a notice to the speaker for the impeachment of Justice Ramaswamy. Speaker constituted a fact-finding committee. Ramaswamy refused to record his statement with the committee. The committee reported gross misappropriation of funds in its findings.
Justice Ramaswamy was a Congress appointed judge, his son was a Congress MLA and his lawyer was none other than Kapil Sibal of Congress. The credibility of Congress was at stake. While the opposition issued a whip to its MPs, Congress played another game. Congress MPs from South launched a campaign declaring it as a conspiracy of North against non-Hindi speaking South. Congress MP R Prabhu whose company Ramaswamy had saved once was in the forefront of leading the North Vs South campaign. Congress never leaves an opportunity to divide people into the lines of caste, language, and region. A corruption case which should have embarrassed Congress made it more defensive and protective of Ramaswamy.

On May 10, 1993, the discussion on Impeachment proceedings began in Parliament. Ramaswamy was represented by Kapil Sibal who was assisted by a lawyer of Punjab and Haryana High Court. Hold your breath before you read the name of the lawyer. It was Misra’s predecessor, former CJI J S Khehar. The lawyer who contested against Sibal was Indira Jaising. No other party can match the ecosystem of Congress. The arguments continued for 6 long hours and Sibal remains the only lawyer to have addressed the parliament in that capacity. The proceedings were telecasted live on television. Finally, 196 members of the House voted for impeachment but 205 Congress MPs abstained from voting because of which the impeachment proceeding against Justice Ramaswami was dropped. Justice Ramaswami pitched a north-south divide and had lobbied & canvassed a lot to give an impression that he is been targeted because he is a judge from the south.

Life has come a full circle. Today Congress is standing against a sitting CJI while Sibal and Jaising are on the same side. Once again the legal system of the country is at stake. Once again Congress is playing the kind of politics which slowly has eroded our four pillars of democracy.