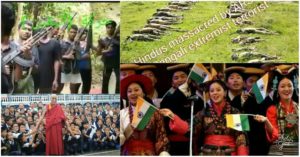 After Buddha achieved nirvana at Gaya, he came to Sarnath and found his five disciples who had earlier abandoned him and preached his first sermon to them. Later his preachings were represented on the Ashoka pillar by King Ashoka, thereby promulgating the Dhamma- Chakka ( in Pali ) or Dharmachakra. The Buddha described the 24 qualities of ideal Buddhist follower. According to the Puranas of Hinduism, only 24 Rishis or sages managed the whole power of the Gayatri Mantra. The 24 letters of the Gayatri Mantra depict those 24 Rishis of the Himalayas. Both Buddhist and Hindu beliefs are represented by the 24 spokes of the Ashoka Chakra. The chakra in Indian flag asserts the strong ties of India with the Buddhist faith.

Lots of leftists and so-called liberals are arguing that if Tibetans can be given refuge in India, why can’t Rohingyas be allowed to stay here. The comparison is not only unfair but completely absurd also. Dalai Lama is the spiritual guru as well as the political leader of the Tibetans. At the beginning of the 20th century, Tibet increasingly came under Chinese control, and in 1950 communist China invaded the country. One year later, a Tibetan-Chinese agreement was signed in which the nation became a “national autonomous region” of China, supposedly under the traditional rule of the Dalai Lama but actually under the control of a Chinese communist commission. The highly religious people of Tibet, who practice a unique form of Buddhism, suffered under communist China’s anti-religious legislation.

For years, protests continued but in 1959, a full-scale revolt broke out. The Chinese adopted brutal repressive measures against the Tibetans, provoking charges from the Dalai Lama of genocide. With the beginning of the Cultural Revolution in China, the Chinese suppression of Tibetan Buddhism escalated, and practice of the religion was banned and thousands of monasteries were destroyed. According to BBC-

In the worst single incident, four days ago, the Chinese army fired about 800 artillery shells into the Dalai Lama’s Summer Palace, razing the ancient building to the ground.

The area contained over 300 houses, and thousands of civilians died and were injured in the inferno.

That was the end of the uprising in Tibet. All fighting -age men, who survived the killing, were deported. Those fleeing the city reported that Chinese army burnt corpses for 12 hours. 23 years old, 14th Dalai Lama fled to India, to safety. Dalai Lama dressed as a soldier along with a group of 35 Khambas, 75 officials including 20 ministers, soldiers, and muleteers started his long journey to India on foot, crossing 17000 ft high pass.

Dalai Lama’s escape infuriated the Red Chinese army. Point-blank artillery fire drove peace-loving Lamas out of the summer palace. Red infantrymen attacked the winter palace, rounded up monks in narrow passages and murdered. The corpses of hundreds of slain Lhasans lay in the streets of the city. For many days, there was no news of the whereabouts of Dalai Lama. He reached Twang after 15 days of his epic journey through the Himalayas on foot. When Dalai Lama reached India, his safe escape was hailed by all quarters except Indian Communists. In fact, when Buddhist genocide by the Red Army was taking place, the whole world condemned it except Jawaharlal Nehru. The government of India was heavily criticised internationally for failing to condemn the Chinese crackdown.

Today both Congress and the Left parties are supporting Rohingya Muslims and are trying to pressurizing Indian government to not deport them citing humanitarian ground. Here is what Sitaram Yetury said about Rohingyas-

In 2008, Sitaram Yechury refused to condemn the ‘cultural genocide by the Chinese government’ in Tibet. He said-

Expecting left parties to condemn China is too optimistic. They didn’t even condemn China’s attack on India. No humanitarian grounds, no empathy for brutally treated Buddhists! Even after 57 years, number of Tibetans in India is below one lakh. Rohingyas are already more than 40000 in a short span of time and their number is increasing alarmingly.

It is said that if the USA is the melting pot of cultures, India is the mosaic of cultures. Remember that Hindu, Sikh, Jain, and Buddhist are already fitted in pieces of mosaic and from wherever they come they don’t have to make their place in the mosaic. Every mosaic has a border and all pieces have to fit in the given space. If a piece is becoming too big or pushing other pieces out better not try to keep that piece in the mosaic. Diversity is messy and in the name of humanity allowing Rohingyas to settle here can get messier. Tibetans have never caused any law and order situation in India and Rohingyas have already become a nuisance in Myanmar and early signs can be seen in India too.  Better be wise today then repent tomorrow.