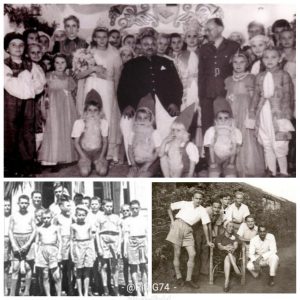 अयं बन्धुरयंनेति गणना लघुचेतसाम्
उदारचरितानां तु वसुधैव कुटुम्बकम् ॥
Meaning: The distinction “This person is mine, and this one is not” is made only by the narrow-minded. For those of noble conduct the whole world is one family.

India has always been a generous country when it came to saving humanity and human lives. Today when the new Citizen Amendment Bill has been passed in the Indian Parliament, making it possible for many persecuted minorities to call India their home, the sentiment is perfectly in line with our ancient traditions.
Last month, on my vacation to Poland, little did I know that on the other side of the globe, standing in biting cold in Warsaw, I would be staring at a statue with tears in my eyes and chest swelled with pride. It was the statue built in the memory of ‘The Good Maharaja’.
This is the story of World War II when the whole world was going through hell. In 1939, First Germans and after a few weeks Russians invaded Poland. Poles were facing the worst. Under attack from both sides, the Polish state ceased to exist. This was the beginning of the end for the Poles. Soviets forced mass deportation of the Polish families to the remotest possible areas of Russia, as far as Siberia. The number of deported Poles is unknown even today as the numbers ran in the millions. In the biting cold winters, they were deported in the most inhuman conditions. Thousands died of cold on the way and later of disease and hunger in camps. The German invasion of the USSR brought some relief. A Polish army was created in USSR under the Polish army commander General Anders and later Polish army and civilian refugees, estimated to be 1,20,000 in all moved to British controlled areas of the Middle East and Central Asia. Most of the civilian refugees were children, women and youth.

During the British rule in India, Indian monarchs formed an organization called Chamber of Princes. All the princes headed the organization one by one. In 1938 it was headed by the Maharaja Digvijaysinhji of Nawanagar estate, in Gujarat. Popularly known as Jam Saheb, he had great knowledge of the Poles and Polish culture. When the problem and horrible condition of Polish refugees were discussed in British War Cabinet, London, Jam Saheb was the first to accept Polish orphans in his estate. When no one was ready to accept Polish refugees his compassion became an example. Many countries followed his action.
Maharaja Digvijaysinhji established a camp at his summer residence in Balachadi and a fund for the orphaned Polish children. He convinced other monarchs of other princely estates too to contribute to the fund. The Polish orphans scattered throughout the USSR were ailing, hungry, alone with both parents dead or lost. They were transported to India with the help of the Polish Consulate in Bombay. The camp had many buildings to house the children including schools, kindergarten, a chapel, hospital, laundry, dining hall and other utility buildings. It was like creating a Polish village in India. Cooks prepared food with Indian ingredients to suit Polish taste. Children aged below 15 were kept in the camp and then shifted to the adult camp at Valivade near Kolhapur, Maharashtra.
The exhausted, ailing and traumatized children when reached Nawanagar, a hot meal followed by a shower welcomed them. It was a luxury they had long forgotten. Maharaja Digvijaysinhji told them-
“Do not consider yourselves orphans. You are now Nawanagaris and I am Bapu, father, to all Nawanagaris, including you”
And that established a bond of a lifetime. Despite the language barrier, the relationship between Polish and locals was strong. He also opened a camp at Chela and involved the rulers of Patiala and Baroda. Business houses like Tata and other individuals raised more than Rs 6,00,000, a huge amount in those days, for the refugees.

After the World War was over, the Polish kids started returning after spending some of the most important years of their childhood in India. To date they love to be called ‘former Indians‘ and meet at the reunion, joining from all over the world. Initially, the communist government did not allow the formation of associations. Later on, some of the refugees who moved to the UK formed the Association of Poles in India to keep their memories of India alive. In the 1980s in Poland, the former pupils of the Balachadi settlement near Jamnagar formed the “Jamnagarians’ Club” as the part of the Society of Polish-Indian Friendship.
Poland has also not forgotten ‘the Bapu’ to its children in need. When Maharaja Digvijaysinh Ji was asked what he wanted as a gesture of thanks from Poland, he jokingly said,” Name a street after my name in Warsaw”. Poland named a beautiful square after him. The square is called Skwer Dobrego Maharadzy- The Square of Good Maharaja. 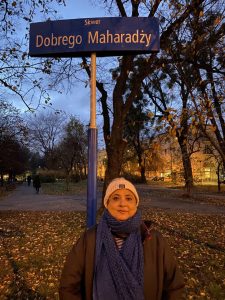 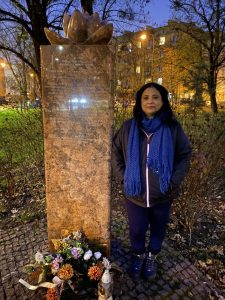 Nearby is a statue dedicated to his memory, with his good deeds written in Hindi and English. Flowers and bouquets lying on the statue were telling the tale of his still alive memory in Polish hearts. Maharaja Jam Saheb Digvijaysinh Ji High School in Warsaw is another memorial. Current Ambassador of Poland in India Adam Burakowski is a graduate of the school.
Coming back to today, from one entitled Western magazine to another, I find all sorts of White entitled folks wagging their crooked fingers at us. ‘CAB is bad for you’, they say. Without an iota of understanding as to how resource-constrained India is, they preach through their stained teeth. Here is the bottom-line though, – refuge is for the needy. Not the undocumented infiltrator, who would rather murder us, than become one of us.

We were, we are and we will continue to be compassionate. But we will never be foolish.