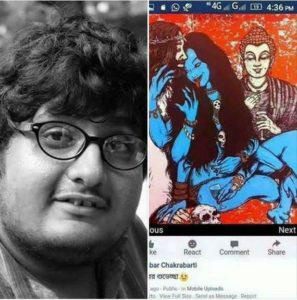 Nilamber Chakrabarti, a student of the philosophy department in Jadhavpur University has posted a highly objectionable painting on his Facebook page. The painting depicts Maa Kali flirtingly sitting on Jesus’ lap and in the background Lord Buddha sitting with a drink in one hand and a cigarette in other. After an outrage, Chakrabarti deactivated his FB account. Jadhavpur University is known for its anti-Hindu and anti-nationalist ideology, just like JNU.

Nilambar Chkrabarti of Jadhavpur Uni, made this?
Kali as a prostitute sitting in Jesus' lap & Buddha with a drink
Hinduism is insulted daily pic.twitter.com/CNRUzaX05l

Some may argue that the person who made the offensive painting seems to be an atheist, as he has shown disdain for three religions. Agreed! But why only three religions? Why have any depiction of another major religion, Islam been avoided? Chakrabarti is an intelligent person. He knows what happened to Charlie Hebdo. The French satirical weekly magazine featuring cartoons and jokes, describes itself as secular, atheist and far-left, almost like Indian left intellectuals. In 2012 Charlie Hebdo published many satirical cartoons of Prophet Muhammad, some of them depicting a nude caricature of him. As a result in 2015, two Islamist gunmen forced their way into the Paris headquarters of Charlie Hebdo and opened fire, killing 12 staff members. During the attack, the gunmen shouted: “the Prophet is avenged”. Precisely this is the reason Chakrabarty has avoided painting anything related to Islam.

Leftists claim to be non-believers but in India it is equal to being anti-Hindu and pro-Islam and Christianity. In 2006, M F Hussain was charged with hurting sentiments of people for painting nude portraits of Hindu Gods and Goddesses. As if insulting Hinduism was not enough, India Today published an advertisement titled ‘Art For Mission Kashmir”. This advertisement contained a Hussain painting of Bharat Mata as a nude woman posed across a map of India with the names of Indian states on various parts of her body. Later Nafisa Ali organized an exhibition of the painting. Despite fierce protests, the painting was displayed on various websites and in exhibitions in North Europe. Hussain promised to withdraw the painting but later sold it at an exorbitant price. To avoid court proceedings and many pending law suits, Hussain went into self-imposed exile. Even after hurting the sentiments of Hindus and running away from law, in 2007 the CPI government of Kerala selected Hussain for Raja Ravi Varma Award. As if that was not enough some of Hussain’s supporters gave a petition to the President demanding Bharat Ratna to be given to him. Congress MP Shashi Tharoor also signed the petition. He wrote in The Hindu–

“This is why I have been particularly happy to add my name to the petition circulated by many of our country’s leading artists and writers, asking the President to confer upon Husain the highest award of the land, the Bharat Ratna”.

Commenting on the controversy, another eminent artist Satish Gujral asked a valid question to Hussain- “Whether he would dare to portray Islamic figures similarly?”

In the name of atheism, attacks on Hinduism and its symbols are becoming bolder. Vulgarity and obscenity is being passed on as art and freedom of expression. If insulting Hindu symbols is FoE, what Kamlesh Tiwari said was his freedom of speech. But unfortunately, he is languishing in jail for allegedly using derogatory language against Muhammad.

Vivek Agnihotri who made ‘Buddha in a Traffic Jam’, a movie exposing Naxal-NGO-Academic nexus and tried to showcase his movie in universities, everywhere he faced opposition from left wingers. So-called liberals stopped him from exercising his freedom of expression. The worst opposition he faced was in Jadhavpur University. Just wondering how Nilamber Chakrabarty would have reacted to the movie. What were his views on the movie?

In our country right wingers are described as goons and left wingers as rebels, revolutionaries, and intellectuals. No Islamic liberal will ever speak against his religion but a Hindu, to achieve the tag of liberal, has to insult his religion. Nilamber Chakrabarty exposes the hypocrisy of his whole liberal clan by insulting three religions and carefully avoiding including Islam in the painting.