For past few days, TV studios are debating the issue of online trolling and the abuse people face on Social Media. The centre of debates, Swati Chaturvedi has written a book ‘I Am a Troll’ and Sadhavi Khosla is claiming to be the whistleblower to expose the dirty tricks of BJP IT cell. The purpose of the whole narrative is to establish that BJP IT cell runs slander campaigns, all BJP supporters are abusive and dangerous and the Prime Minister follows abusive handles and is responsible for their actions.

In past two decades, Main Stream Media (MSM) has lost all credibility. These left liberals, foreign funded media houses are facing major credibility crisis due to their anti-India propaganda. Social Media (SM) has taken away the sheen out of the journalists’ profession. People rely on SM for truth. What irks these journalists is that PM Narendra Modi enjoys phenomenal support on Social Media. He is one of the first politicians in India to have realized the importance of Social Media and made full use of it in 2014 Lok Sabha elections.

Swati Chaturvedi and Sadhavi Khosla are posing as the only righteous, ethical and victimized females of this country. In my 3 years on Social Media, I have also seen many ups and downs, threats, and filthiest of abuses by journalists and members of political parties, despite never using any foul language. For one of my tweets on OROP, I faced the worst kind of abuse.

Why did my tweets on the truth of OROP rattle many?

Swati Chaturvedi, playing victim, is one of the most abusive and foul mouthed females on Twitter.

Look at some of her tweets- 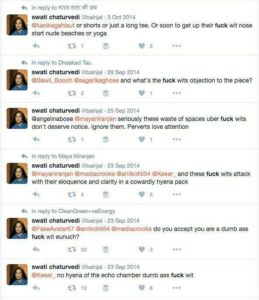 In TV debates she said that she uses cuss words in retaliation of trolling by thousands of abusive BJP trolls. Here are a few examples where she has abused without any provocation.

@iKumarbabu their is a difference they are elected representatives limpet fuck wit ajit singh was an illegal occupant. He lost

Is their a bigger ass than @minhazmerchant on twitter? All I see is hate & bile. Yawling issuing imaginary challenges. Perfect sangh gent

Not only does she abuse but she supports many abusive handles also by regularly engaging with them. She and Barkha Dutt are claiming that they are getting rape threats on SM. Both Ms Chaturvedi and Barkha Dutt filed FIRs. Instead of ranting on SM ‘I am a female and I am being trolled’ why don’t they pressurize the police to find the culprits? Earlier they tried to gag Social Media by involving Maneka Gandhi, the Women and Child Development minister. But the purpose was defeated when people started complaining about these abusive females only. It would be interesting to know Ms Chaturvedi’s views on Arvind Kejriwal calling PM Modi ‘a coward and a psychopath’ ?

Serious question. Is it normal for women BJP supporters to "open their legs" for Modi? Why do they seem to see this as a regular thing?

The narrative of online abuse is not what it seems. Plan is something else.

Sources- Plan hatched by Lutyens to control Social Media, will be targeting of Social Media handles by drama of threats to get Law framed.

Sadhavi Khosla made some serious allegations on BJP Social Media cell. She says that she was formerly in BJP social media team and she was asked to do certain things which were ethically wrong. After that she left BJP to join Congress. Now that she is a member of Congress, is she unbiased? With Punjab elections around the corner, isn’t she looking for an election ticket from Punjab? Isn’t her documentary on drug menace in Punjab politically motivated?

BJP certainly has an IT cell headed by Mr Amit Malaviya. But there is no official IT team working on social media, at least not in my knowledge. Most of the people are working on volunteer basis. There are many small groups who at different times raise different issues and others just join in. Snapdeal issue was purely spontaneous as people were angry and hurt at Aamir Khan’s statement. This is not the first time that it happened. Earlier also on many occasions people reacted spontaneously. Trends on Chandan Mitra’s statement on social media, government’s plan to hold cricket series with Pakistan are some of the occasions, when volunteers did not hesitate to bash their own party. Trends on Shahrukh Khan’s movie and Times Now criticizing Indian cricket team after its defeat in World Cup were also spontaneous.

Even if a movement was planned against Snapdeal, how was it wrong? Article 19 of our constitution gives equal freedom of speech and expression to everyone, journalists or common men. The people criticizing Snapdeal movement were same who supported stone pelting and violent protests in Kashmir a few days back.

The allegation that ‘the Prime Minister follows abusive handles’ is most ridiculous. PM follows more than 1500 handles on twitter including Arvind Kejriwal, one of the most abusive politicians also. Is he responsible for what he writes? Can Ms Chaturvedi  take the responsibility of 187 handles that she follows?

Main stream media is scared of Social Media as the bluff, lies and propaganda of MSM has been exposed by SM many times. Check these tweets-

The Hindu was not responsible for Hasan Suroor but @Novartis is for @bhak_sala@bainjal ???#Support_Bhak_Sala pic.twitter.com/p6KjfJ1mf7

Never knew u were such a fool @BDUTT .
How did u get sender's whatsapp screenshot?
U r abusing urself.Nd saying u r receiving death threats? pic.twitter.com/g1giJF4Jew

To save their dwindling careers and reputations, false narrative is being spun. Journalists have print and electronic media to express their rotten, biased and prejudiced views but common man has only Social Media to make his voice heard. The voices are getting strong. Bullying SM will only make these voices stronger.