'Award wapsi gang' is back again!

This time they're perturbed abt demonetisation
Sir @narendramodi they shud also be probed for black money pic.twitter.com/CwR5EAZGms

In September 2015, Dadri, a dusty small town just next to NCR became the talking point in national and international media when a man named Mohammed Akhlaq was killed by a mob for keeping beef in his house. A few months before this incident, Rohith Vemula, a student of Hyderabad University, had committed suicide in his hostel room. Both these incidents were unfortunate. But in a diverse and large country like ours, such incidents are not uncommon. But soon the bloodsucking political vultures and media hounds turned them into something serious enough to draw international attention. Dadri and Hyderabad became hot destinations of death tourism. But that was not enough. Soon a few so-called intellectual and secular writers, filmmakers and artists joined the vultures and hounds. Intolerance and returning of awards became the topic of discussion in television studios while the common man wondered what had changed so suddenly in the country. To a common man, everything was the same, but the agenda setters were working overtime to project it to be what it was not.

Today, the country is going through a political, economic and social transformation. Recently, PM Narendra Modi declared the demonetization of big currency notes. People have seen corrupt governments with scams of amounts unheard of. PM Modi had promised to the country that he will make India corruption free. Demonetization was the first major step towards it. But since the day it was declared, political parties and media people alike have been making hue and cry about the decision. Now, the ‘Award Wapsi gang’ has also joined them.

Who are these people, these so-called ‘Eminent’ citizens and ‘Intellectuals’? Why are Nayantara Sahgal (a writer), Anand Patwardhan (a documentary filmmaker), Jayati Ghose (a professor in JNU), Vivan Sundaram (an artist), Prashant Bhushan (a lawyer) or Chandru Krishnaswami (a retired justice) termed as intellectuals? What qualifies them? And why are they demanding a roll back on demonetization? If the killing of common man upsets them, why have they never bothered to raise their voice against killing of Hindus in Kerala and West Bengal? If they are perturbed about the economic conditions and the suffering of public due to it, why did they never protest against the scams of the previous government? Has the money looted in these scams not affected the lives of the common man? If they feel that India is becoming intolerant, why have they never asked questions to West Bengal government on banning Durga Puja?

The answer to these questions lies in their fake ideologies and political affiliations.

Jayati Ghose, a Marxist professor is known for spewing venom against Hindus. ‘Hindu society is the most violent society in the world’, & ‘Government is destroying freedom of expression’ are some of the views propagated by Jayati Ghose. 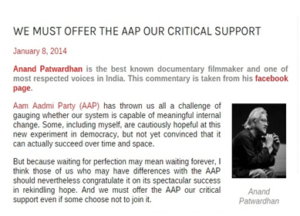 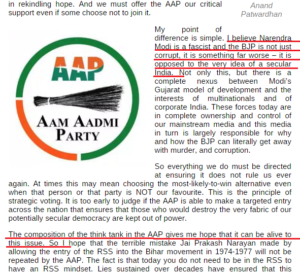 Prashant Bhushan, a former member of AAP and who recently launched his own political party, is known for his pro-Naxalite, pro-separatist and pro-terrorist views. How can we say that his views are apolitical and unaffiliated?

Same is the story of all of them. These people do not represent an average apolitical, hard working, honest and nationalistic citizen of India. We have seen worst times as far as the economy is concerned and our perseverance has paid off. I have yet to meet a common man not appreciating demonetization. Everyone is supporting the move and standing firmly behind the government and PM Modi.